Tune in as Lea DeLaria and Yoruba Richen discuss the state of LGBTQ+ women’s representation.

We want to live in a world where all queer women are valued. Visibility and authenticity in media are the most powerful tools to realize that vision. Frankly Speaking Films, creators of the feature documentary AHEAD OF THE CURVE, presents Lea DeLaria & Yoruba Richen in conversation about the state of LGBTQ+ women’s representation in film, where we’re headed, and what we want now. Moderated by Chanelle Elaine, the conversation will be followed by a Q&A.

Lea DeLaria seems to have achieved overnight stardom with her three time, SAG Award winning, stand-out role as ‘Carrie ‘Big Boo’ Black’ in the Netflix hit series “Orange is the New Black.” However, DeLaria’s multi- faceted career as a comedian, actress and jazz musician, has in fact, spanned decades. Lea holds the distinction of being the first openly gay comic on television in America which led to countless Television and Film roles portraying Police Lieutenants, PE Teachers and the Lesbian who inappropriately hits on straight women. Selected TV credits: “The Code,” “Shameless,” “Broad City,” “The Jim Gaffigan Show,” “Awkward,” “Californication,” “One Life to Live,” “Law and Order: SVU,” “Will and Grace,” “Friends” & “Matlock.” Selected Film credits: Cars 3, Support The Girls, First Wives Club, Ahead of the Curve. She’s received Obie & Theater World Awards, and a Drama Desk nomination for her portrayal as ‘Hildy’ in the Public Theatre’s revival of On The Town, and has played both Eddie & Dr. Scott in the gender-bending Broadway musical The Rocky Horror Show. Lea was the featured vocalist at the 50th Anniversary of the Newport Jazz Festival, and has performed in some of the most prestigious houses in the world including Carnegie Hall, Lincoln Center, the Chicago Symphony, Hollywood Bowl, The Royal Albert Hall and the Sydney Opera House. Lea has five records on the Warner Jazz and Classics label and her book “Lea’s Book of Rules for the World” is in its third printing at Bantam Doubleday and Dell. Her sixth record, House Of David delaria+bowie=jazz, was released in the Summer of 2015 to critical acclaim. Lea can currently be seen as ‘Queenie’ in HULU’s “Reprisal,” and as ‘Molly Yarnchopper’ in the Netflix and DreamWorks animated series “Kipo and the Age of Wonderbeasts.”

Yoruba Richen is a documentary filmmaker who has directed films in the U.S. and abroad. She is currently directing a film for FX and Hulu about the police killing of Breonna Taylor in Louisville KY. Her work has been featured on PBS, New York Times Op Doc, Frontline Digital, New York Magazine’s website -The Cut, The Atlantic and Field of Vision. Her film How it Feels to Be Free will air on PBS’s American Masters in 2021. Yoruba’s previous film The Green Book: Guide to Freedom was broadcast on the Smithsonian Channel to record audiences and was nominated for an EMMY. Her feature documentary, The New Black won multiple festival awards and was nominated for an NAACP Image Award and a GLAAD Media Award before premiering on PBS’s Independent Lens. Yoruba won a Creative Promise Award at Tribeca All Access and was a Sundance Producers Fellow. Yoruba is a featured TED Speaker, a Fulbright fellow, a Guggenheim fellow and a 2016 recipient of the Chicken & Egg Breakthrough Filmmaker Award. She is the Director of the Documentary Program at the Craig Newmark Graduate School of Journalism at CUNY. 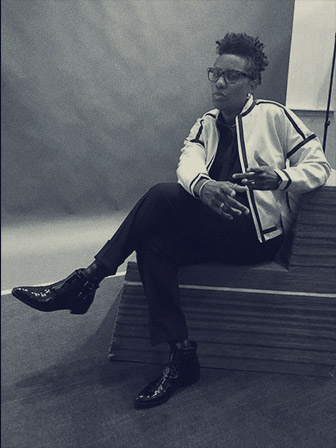 Chanelle Elaine is a social impact producer, working in community with filmmakers, activists and philanthropists in advancing the global initiative of equality for girls and women everywhere. Founder of CreativeBionics, Chanelle Elaine’s first feature, First Match, is a Netflix Original and winner of the SXSW Audience and LUNA Gamechanger awards.

CreativeBionics has produced videos for the NoVo Foundation, the Women’s March on Washington, President Obama’s Tribal Nation’s and Generation Indigenous Youth conferences, plus many other organizations committed to equality and diversity. CB’s commercial and branded content includes work for MTV, Univision, The Avocado Board of Mexico, Ubisoft, L’Oreal, as well as a multitude of fashion designers over 6 seasons working within New York’s Fashion Week.

Chanelle is honored to have been a fellow within the Sundance, SFFS, IFP, and Film Independent institutions. And was a Dean’s Fellow at Columbia University, where she received her MFA.